You will arrive either at Sendai Airport or Narita Airport. Then, follow the instruction below to reach JR (Japan Railway) Sendai Station (see 1a or 1b below). From JR Sendai station to Aoba-yama campus, take Sendai city subway Tozai-line (East-West 東西) bound for "Yagiyama Zoological Park (T01)" to "Aobayama (T02)" station (see 2 below). Campus map is in 3 and tourist information see 4 below.

1a: From Sendai Airport to JR Sendai Station

Insert money into a vending machine and touch the button 650 on the screen to buy a ticket. Should you need an English instruction (which is rarely the case), you may touch the English button available on the screen. You should press a button to open a door when you get on or off a train.

1b: From Narita Airport to JR Sendai Station

Narita Express takes about 60 minutes from Narita Airport to Tokyo Station. The regular fare is 2940 (+-200) yen. (It costs less if you purchase a JR ticket directly through Sendai than buying two separate tickets.) A rapid train is also available at a lower fare of 1280 yens. It takes about 84 minutes.

At Tokyo station take Tohoku Shinkansen superexpress line. Tohoku Shinkansen superexpress train connects Tokyo Station and Sendai Station. It costs about 10000 yen or more depending on the day and seat type (non-reserved, reserved, green-comfort). The travel time is about 1 hour and 30 minutes for a Hayabusa or a Hayate train, and 2 hours or more for a Yamabiko train. Avoid a Max Yamabiko (different from Yamabiko) unless you want to enjoy a double-decker train for ages.

The "JR EAST PASS" is available for non-Japanese travelers from abroad who are staying in Japan for a short time for the purpose of sightseeing. The cost of the pass for an adult is from 22000 yen for any 5 days within 14 days of issuance. With this rail pass, you can travel on all the JR East lines as many times as you like, including from Narita Airport to JR Tokyo Station and the Tohoku Shinkansen superexpress line. You can purchase the pass either from online of JR east pass web site , from your travel agent, or at JR EAST Travel Service Center at Narita Airport and Tokyo station.

You need to note with the "JR EAST PASS", you can not reserve a sheet and you can not use Narita Express and the fastest Shinkansen "Hayabusa" and "Hayate" which have only reserved seat. You can reserve a sheet either from online of JR east reservation site or at JR EAST Travel Service Center at Narita Airport, Tokyo station, and other stations.

Once you arrive at the JR Sendai Station, follow the signs to the Sendai City Subway Tozai-line (東西線), and take a subway bound for "Yagiyama zoological park (T01)" to the "Aobayama (T02)" station. At the Aobayama station, take North-1 exit to the Aoba-yama campus. Turn left at the exit to the graduate school of science. English instructions to take the subway, see here .

3: Location of the Institute in Aoba-yama Campus

Astronomical Institute is in the building of the Science Complex C (5th floor, H-04 in the map below). 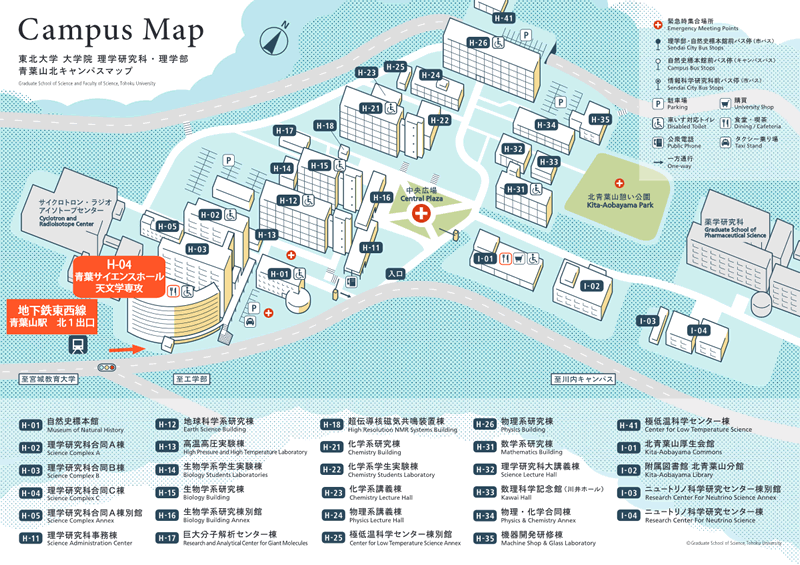 * Science Complex C is H-04 in the map. Click the map to open the PDF file.

Sendai city museum ( web site ) is close to us.